​​Liverpool fans have been lauding Fabinho after an impressive display against ​Manchester United during their 4-1 win in Michigan.

The Brazilian midfielder was signed from Monaco way back at the beginning of the transfer window for a then eye-watering £43.7m, but with performances like he showed against Jose Mourinho’s United he’s well on his way to paying back the fee. 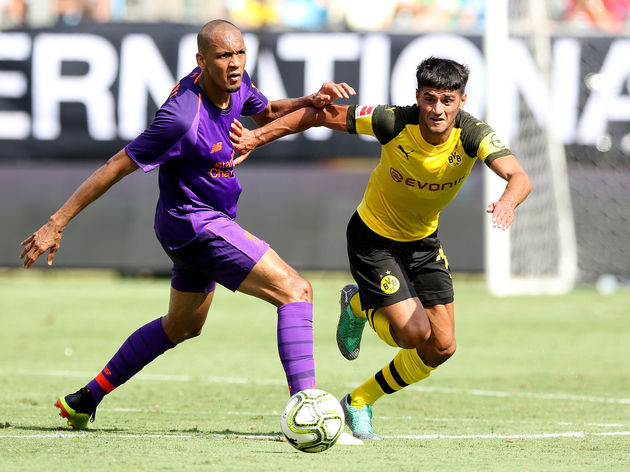 The Campinas-born star has featured in all seven of Liverpool’s pre-season friendlies, giving Reds fans plenty of time to see their new boy in action.

Liverpool boss Jurgen Klopp admitted he is “excited” by the 24-year-old signing – though, honestly, that seems like a bit of a daft statement; you’re the manager that signed him, of course you should be excited!

Fabinho is absolutely class. I love how he makes everything he does seem so easy and effortless.

However, with a stellar performance against Manchester United, the buzz of excitement seems to have spread to the fans and they’re responding in force.

He was great. He just glides across the field, picks the ball off his opponent and quickly releases it to a more attacking player. Perfect for our purposes.

The amount of praise being leveled towards the new player might be overwhelming for some, but it’s unlikely to faze Fabinho – who is known for his modest targets and goals. As the ​Daily Express reported, for his first season at Liverpool the player has only set himself the goal of lifting the Champions League trophy.

Fans were quick to praise his simple, well-drilled game and the lack of mistakes he made.

Liverpool fans are so use to watching our midfielders having to chase down attackers and make last ditch challenges they aren’t use to watching a player like Fabinho make everything look so effortlessly.

Yes, it’s only one game, but not making costly mistakes seems to have been a difficult task for a number of Liverpool players in recent years.

With Fabinho, fans seem confident that he will be controlled with the ball and with an astute first touch shouldn’t give it away very often – so no desperate chasing back and last-ditch tackles from the Liverpool midfield next season, I’m afraid.

He also seems committed to a challenge.

As one Liverpool fan put it: “He either tackles the ball or takes your leg out.”

There’s no getting past him

, he either tackles the ball or take your leg out, what a tank

Now, whether that is a good thing remains to be seen – especially alongside the red card wrecking ball that is Naby Keita (he was dismissed four times last season).

I was very impressed with Fabinho performance yesterday. Excellent reading of the game, very composed on the ball, won every header and never lost possession. Kept Alexis Sanchez quiet. His best preseason performance in a big game. pic.twitter.com/R3a6ZDs3Jn

It does mean one of two things for Liverpool’s midfield next season, though. Either it is going to be an impenetrable wall, or the Reds are going to find themselves playing with nine men regularly.

Either would be wonderfully entertaining to watch.