new boy Jack Wilshere ​has suffered his first red-faced moment following his move from London rivals ​Arsenal, after falling victim to a prank from teammates Mark Noble and Aaron Cresswell.

Wilshere, who moved to the London Stadium earlier this summer on a free transfer, has been getting to know his new teammates in recent weeks, as the club prepare for life under new manager Manuel Pellegrini.

Part of the 26-year-old’s obligations since arriving have been completing various media and sponsor commitments, including a number of interviews. 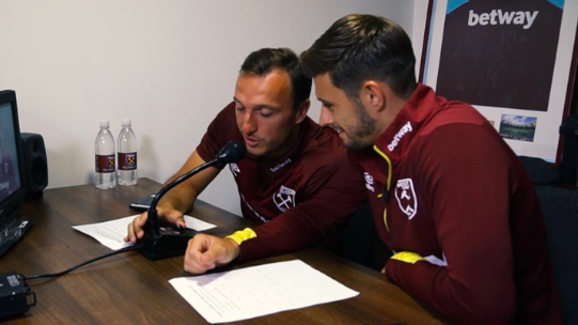 Unfortunately for Wilshere, what he didn’t realise as he sat down for what he thought was another run-of-the-mill interview, was that he was being set up by Noble and Cresswell.

Now, courtesy of Betway, we are able to bring you footage of Wilshere being made to feel hot under the collar, as West Ham skipper Noble, along with Cresswell, directs traffic to an actor posing as a journalist.

The ‘interview’ begins in comical fashion as the actor confesses his modest interest in football – before awkwardly commenting that Wilshere looks ‘fit’. He continues along the same vein of questioning, likening Wilshere to midfield compatriot Noble as a player before suggesting to the former Gunners star that he is ‘smaller’ than the West Ham captain.

With a visibly confused Wilshere wondering what on earth is going on, things escalate as Wilshere is asked how determined he is to return to the national setup – Ireland’s national setup that is.

With Wilshere now irked and blissfully unaware that he has been setup, things conclude with a quick round of shirt signatures. Irritatingly for the Hammers new number 19, he is asked to forge both Cresswell and Noble’s signatures on the back of replica shirts. Wilshere reluctantly complies, before his teammates charge the set to reveal it had all been an elaborate hoax.

With the fun and games aside (and perhaps one portion of Wilshere’s club initiation out of the way), the trio will now get serious as they prepare for West Ham’s opening day ​Premier League fixture away at ​Liverpool.